We’ve all winced at those scenes in CSI:Nowheresville when somebody in a lab coat ‘enhances’ an image until you can see the reflection of the room in the pupil of somebody’s eye, or whatever.

This video is like that. Clearly implausible, most likely witchcraft.

Alternatively, a group of researchers at MIT really have found a way of extracting temporal information from CMOS sensor skew, sufficient to reconstruct audio up to around the 400Hz range from pictures alone.

Damned impressive, even if ‘sorcery’ is a more plausible algorithm.

I’ve been playing with Minecraft, inevitably prompted by various and sundry nieces and nephews. My explorations do not, however, revolve around surviving first-night Creeper attacks: I’m more interested in the programming interface.

END_OF_DOCUMENT_TOKEN_TO_BE_REPLACED

Our favourite Kickstarter of the moment,  Mirobot, reached its second stretch goal overnight, which adds a line-following add-on to the dinky little educational robot.  Still a few days to book your unit!

In the previous post I wrote about the challenge of catching and holding peoples’ attention with electronics and programming activities – if you’ve seen DEMO: The Movie you’ll know I’m quite big on attention.

The Arduino microcontroller platform is a terrific tool, but it’s hard to present a project which is both immediately appealing and instructive. Projects tend to be fun but complex, or useful-but-dry tutorials. As with many fields of life, I suspect the answer is: robots.

END_OF_DOCUMENT_TOKEN_TO_BE_REPLACED

Pick a random stall at Maker Faire UK and there’s a fair chance it’ll have flashing LEDs. And where there’s a flashing LED, there’s usually a little blue circuitboard driving it. The blue board is the famous Arduino, a family of open-source microcontrollers designed to allow easy interaction between code you write and real-world sensors and actuators.

There’s a complex and ever-expanding ecosystem of Arduino-compatible boards and interface units, and to a novice it’s all a bit overwhelming. I am that novice. Indeed, the list of Arduino projects I’ve completed looks like this:

However, awareness of what’s possible expands one’s set of available tools, and Arduino feels like the sort of thing I might, at some point, find useful. So every now and then I tinker a little. My tentative, toe-in-the-water approach to Arduino goes like this:

END_OF_DOCUMENT_TOKEN_TO_BE_REPLACED 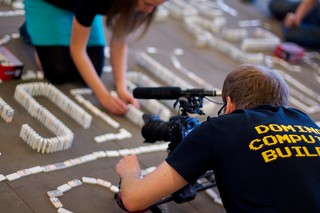